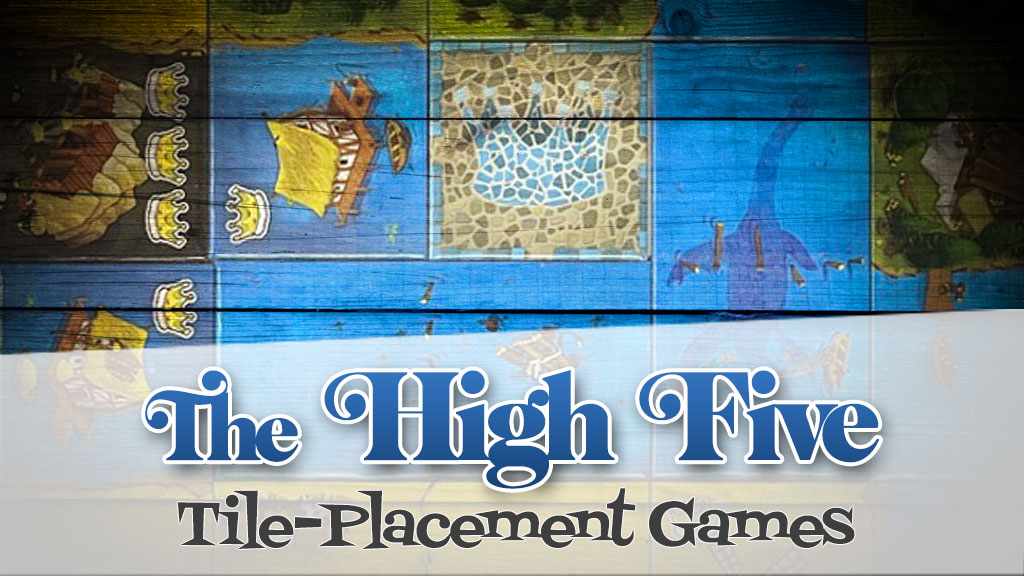 You know it’s a solid topic when games like Azul, Tsuro, Planet, and New York 1901 were honorable mentions.

Without further ado, here are the High-Five tile-placement games for you and your family.

The oldest game on this list is considered a modern-day classic by many. Carcassonne offers a simple ruleset, and speedy turns eliminate player boredom. Sure, a medieval France theme may not seem enticing, but connecting roads and building castles with cardboard tiles sure is fun. It’s no surprise Carcassonne still sells well after over 20 years on the market.

Another classic tile-placement game makes my list. Published in 2003, Alhambra gives Carcassonne a run for its money in the age department. In Alhambra, players buy tiles to place in their Alhambra, a fortified palace. After each of the four scoring rounds, players earn points based on building type majority in addition to how well-fortified their palace is. As with most games on our lists, the rules are simple to learn, and the intricacies develop over repeated plays.

This clever tile-placement game is all about constructing a zoo for bears. As you put the Tetris shaped pieces on the plot of land in front of you, you acquire new tiles to expand your park. Bärenpark offers interesting spatial puzzles to solve and racing elements to keep you engaged from turn to turn. The artwork is fun and bright for a game in the tile-placement genre, and one I think the whole family can sink their teeth into BBärenpark. You’ll have fun clawing your way to victory! Okay, enough with the puns. That was stupid.

In Karuba, players race to collect treasures by moving their adventurers across their game board. This is done by laying tiles on your board to create paths for your adventurers to move along. Every player uses the same tiles from their own personal tile stack in the same order. Karuba becomes a puzzle of efficiency and rewards optimal play over random luck. Sure, players spend most of the game focused on their own boards, but your opponents are always lurking in the background. They can’t directly influence your board, but their constant presence, along with the race elements of the game, creates a nice tension throughout the game.

Sure, Kingdomino is a simple selection and tile-placement game, but that doesn’t mean it’s not awesome. Each domino-style tile in the game has a value, and turn order is based on the tile’s value you select each round. Players earn points by connecting the terrain types depicted on the tiles, and the five by five construction constraints force players to make tough choices. Kingdomino is simple enough for an eight-year-old but provides engaging gameplay for the whole family. If you want to add more complexity to your game, consider checking out its big sister, Queendomino!