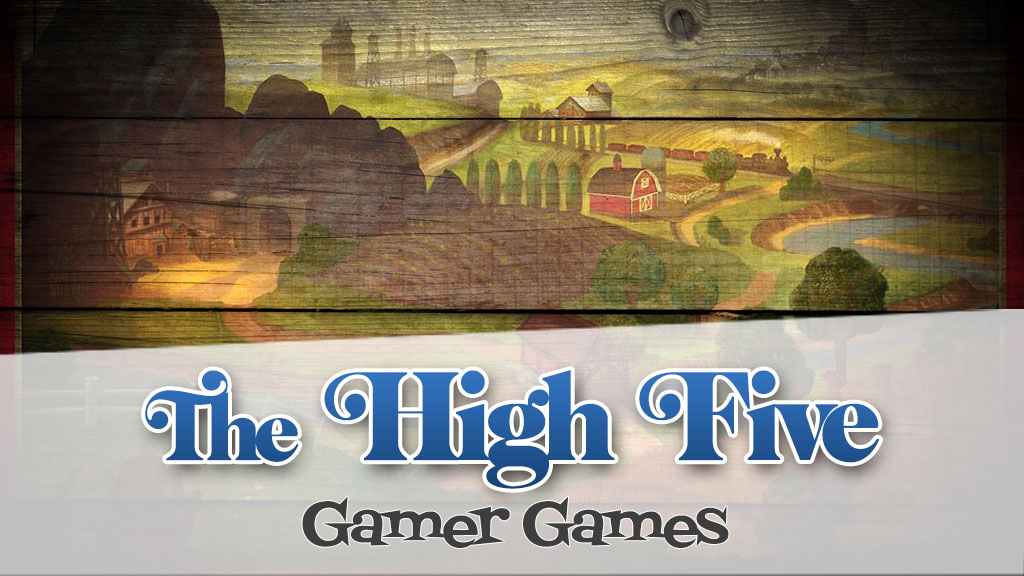 In this week’s High-Five, I took a look at my top five family-friendly gamer games. These are games for families ready to take their gaming to the next level. These games are on the edge of our Recommended Games list, usually missing out due to increased complexity. However, that doesn’t mean these are 4-hour brain-melting excursions. Baby steps, folks!

There are a couple of honorable mentions this week, including Tapestry, an abstracted civilization-building game. The other honorable mentions, The Castles of Burgundy and Bruges, are both designed by Stefan Feld.

Now, let’s get to the list before things get too complicated.

Some of our launch titles were about around the smash-hit, Pandemic. It is no surprise that families may want to build upon their experiences playing this game, and Pandemic Legacy: Season 1 is a great option. This legacy game requires at least 12 games to complete, with each game acting as a single month of a year (You may have to play a month more than once if you lose the first time). Between games, players open secret envelopes and change the rules. Each previous game’s results alter the next game’s experience to create an overarching narrative that keeps players immersed and invested. I wouldn’t recommend picking this up without playing regular Pandemic first, but if you feel like you’ve played your copy out, this is an excellent next step. To top it off, it’s cooperative so that you can embark on this journey together!

4. The Voyages of Marco Polo

The Voyages of Marco Polo is the most complex game on this list. I added it because it does a phenomenal job introducing players to asymmetric player powers. Sure, there are history lessons to learn from this game, but the player powers push this game to the next level. In The Voyages of Marco Polo, players use their dice to take unique actions while moving east across Asia. In other games, you receive a tiny player power that hardly changes the game. In this game, you get an out-of-this-world game-altering ability! Comically, everyone always thinks the other players’ abilities are more powerful than theirs. Of course, they’re perfectly balanced, as you’d expect in a strategy game. Either way, using your power feels incredible. This Voyages of Marco Polo is a great jumping-off point for families looking for something crunchy yet approachable. Solid components and interactive gameplay doesn’t hurt either.

3. Architects of the West Kingdom

Architect of the West Kingdom is overwhelming to look at on the table. There is a lot to take in, but in the end, your investment will be rewarded. Players start the game with a handful of wooden workers to place on the board throughout the game. Each area of the boards provides a unique action that becomes more powerful as you add more of your workers. Don’t keep too many workers in one spot, or your opponents might throw them in jail! Architect of the West Kingdom is a next-level game for folks who appreciate strategic games with plenty of interaction and exciting decisions. Another cool aspect of the game is the idea of virtue and corruption. Virtuous players earn more points at the end of the game (long-term benefits), while corrupt players get more (Short-term) benefits throughout the game but may lose points later as a result. It’s a fascinating struggle. There are not a lot of safe spaces to learn a lesson like that. Can you think of a better way to teach such a valuable life lesson?

It’s a Wonderful World; the game, not the movie, takes the drafting elements of 7 Wonders and kicks them up a notch with an innovative resource and combo system. Each round, after drafting, players decide to keep or sell the cards they just selected. The game also pa2ys out resources in a set order each round, allowing players to scaffold resources and efficiently build cards. This combo system is the highlight of the game. After playing the game once, It’s a Wonderful World is a breeze to play, but the introduction may be a bit overwhelming. With that said, the depth of play combined with stellar artwork and components make It’s a Wonderful World a tremendous next step for a gaming family.

Raccoon Tycoon is a simple market manipulation economic game. I’ll pause to let that mouth jargon sink in. Trust me, I know that description doesn’t light the world on fire. However, quick turns and basic action selection help gamers learn the fundamentals of supply and demand. Throw in woodland animals dressed up in fancy clothes, and you’ve disarmed the most casual gamers. Players must buy low and sell high, and along the way, construct buildings to do that more efficiently. According to Board Game Geek, Raccoon Tycoon is the least complex game on this list, but I think it may be daunting to some players. Either way, Raccoon Tycoon is the perfect bridge into gamer games.