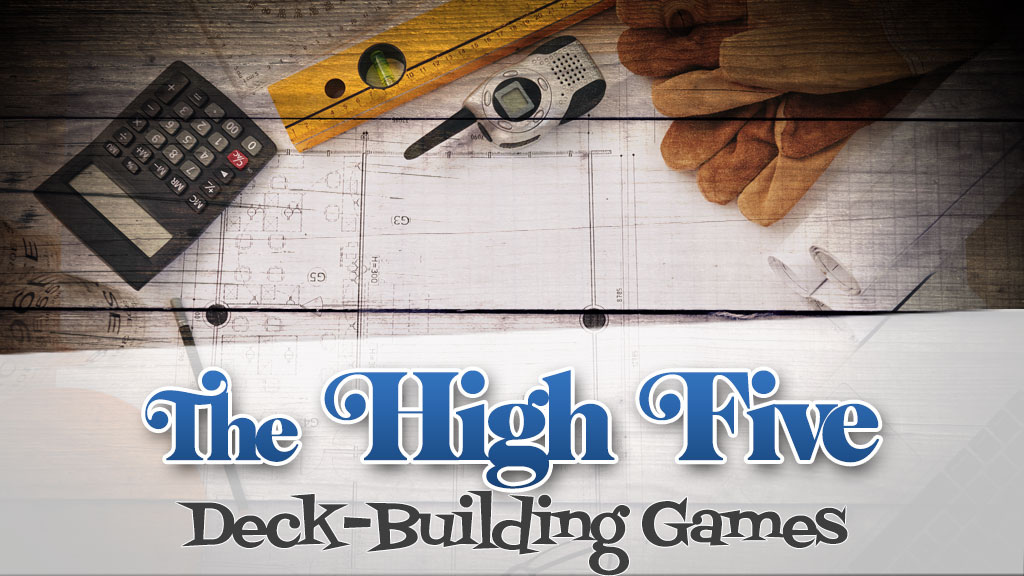 In this week’s episode, I took a look at deck-building games. In deck-building games, players continually add cards to improve a personal deck while they cycle through it. I stuck with card-based deck-building for this list, and we’re keeping the treated lumber jokes to a minimum. Before we go to the list, I want to highlight a couple of unique titles.

By Donald X Vaccarino and Rio Grande Games, Dominion receives an honorable mention as the grandfather of all deck-building games. The second honorable mention goes to the game that combined deck-building with scrabble. Paperback is a unique concept that works surprisingly well, and the pulp fiction artwork pushes it over the edge.

Now, on to the High-Five!

Legendary: A Marvel Deck-Building Game from Upper Deck makes this list for a couple of reasons. The first, it’s a cooperative deck-builder with an insanely popular theme. Cooperative games are great for families, and stronger players can help the weaker players without playing favorites. The second reason? The sheer amount of content available for this game is staggering. If you have a favorite Marvel character, the odds are pretty good that they’re either in the game or one of the many available expansions. Does anyone want to play as Howard the Duck?

4. The Quest For El Dorado

In The Quest for El Dorado, the deck-building game from Ravensburger and famed designer Reiner Knizia, players utilize deck-building to traverse treacherous terrain to locate the elusive city of gold. The design is clean, uses a customizable game board, and embraces the race atmosphere commonly found in deck-building games. Like most Knizia games, it’s robust and devoid of extraneous filler.

Not only am I a sucker for the theme, but I applaud this game for its introductory approach to deck-building. Harry Potter: Hogwarts Battle is one of our recommended games for a reason. This game teaches deck-building concepts from the ground up, so even inexperienced players will be comfortable in no time. And since the game is cooperative, players can help each other defeat the villains as they work through the seven Harry Potter books. Lastly, unlike most famous IP games, the movie photos used in this game are outstanding. If you want to learn more about this game, we discussed it in greater detail on a previous podcast episode.

Clank!, published by Renegade Game Studios, combines deck-building with a game board. It has press your luck elements and an evil dragon that fights back against the heroes. “Clank!” is the first game I played that felt like a complete board game with deck-building, instead of a game entirely about deck-building, a subtle but essential distinction. Clank! A Deck-Building Adventure is the most complex deck-building game on this list, but families with kids 10 and up should be able to handle this one.

Star Realms from White Wizard Games is a clean deck-building game with a theme that works. It features bases that stay in play from round to round and utilizes factions that synergize together. The concepts in this game are simple to learn, and you won’t be distracted by strange rules or exceptions. Star Realms also has a steller app version that I’d be embarrassed to know how many hours I have logged on it. If the space theme doesn’t work for you, you can try Hero Realms, a fantasy implementation of Star Realms. Although the artwork in Hero Realms might be questionable for younger players.