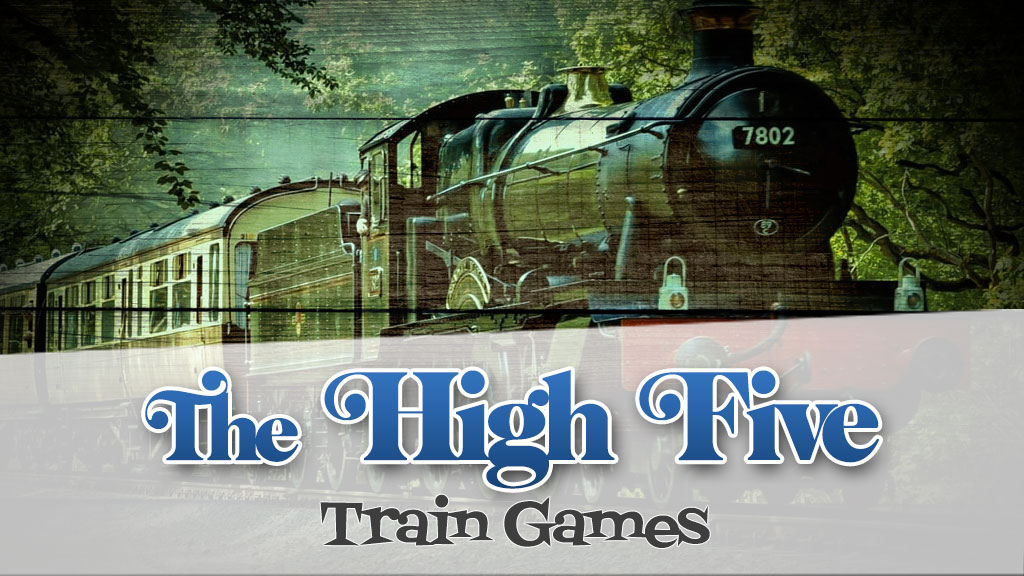 Fresh off the heels of our first podcast.  Here is a list of the High-Five Family Friendly Train games for you to explore.  Some may be Recommended Games, and others may be hard to find, but if you get a chance to play any of these games, you won’t be disappointed.

Traintopia plays over several rounds, in which players use tiles to expand their railroad, while commuters/tourists/goods score victory points.  The game is extremely colorful and only takes about 30 minutes to play!

A set of dice is rolled into the middle of the table, and players must draw the rolled faces on their personal map to create new routes. The goal is to connect the exits surrounding your board. The more exits you connect, the more points you score. The game includes chunky dice and dry-erase boards. Railroad Ink is a family-friendly “roll & write” that is easy to learn and provides intriguing decisions. Note: A “roll & write” game is one which players “roll” dice and “write” or record the results on a personal sheet. One of the most famous roll & write games is Yahtzee.

In Colt Express, players take on the roles of old-west bandits attempting to steal the most loot from a train. Funny thing is, players don’t know exactly what their opponents are up to each turn. It won’t take long for laughs to start after you run across the train to pick up a jewel that isn’t there anymore!

The granddaddy of all train games, Ticket to Ride is one of the most popular tabletop games of all-time.  During the game, players collect train cards to make connections between cities and complete destination tickets.  The original included a map of the United States, but multiple editions and map expansions have been released to include Europe, Germany, India, France, Pennsylvania, and more!  Ticket to Ride is teaches short and long-term strategy as well as Geography!