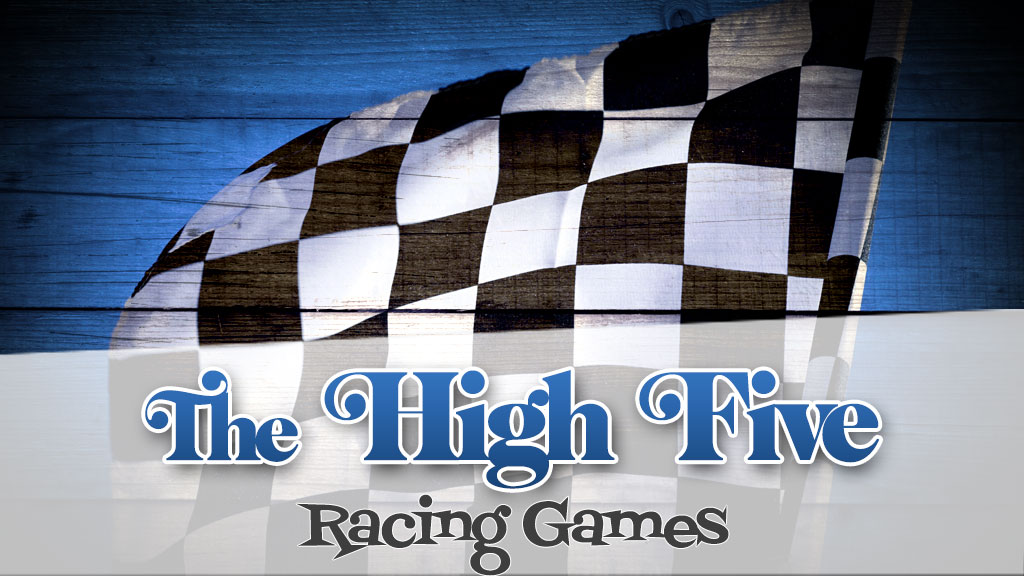 In this week’s High-Five, I took a look at my top five family-friendly racing games. These are games with racing in them. They are not all NASCAR games, so feel free to proceed with the list.

There are only a couple of honorable mentions this week, including Spiel Des Jahres Nominee Luxor, a game in which players race through a tomb to find treasure. The other honorable mention is Long Shot, a fun and exciting horse racing game for 3-8 players.

5. Fireball Island: The Curse of Vul-Kar

In Fireball Island (The Curse of… I’m not going to write that every time), players race around a cursed island searching for treasures dodging fireballs. At some point, the island will awaken from its slumber, and it’s a mad dash to get off the island with your treasure! This game’s toy factor is off the charts, considering the game takes place on a 3-D island with paths, traps, and fireball marbles! A re-imagining of the 1980s classic, Fireball Island is sure to bring back the feels of nostalgia.

Jamaica is a game about racing your pirate ship around the island of Jamaica as fast as you can. Along the way, players hope to collect treasure, avoid curses, feed their crew, and battle fellow looters. The game introduces an exciting action mechanic in which players simultaneously play cards from their hand of cards based on the dice set chosen as day and night actions. Jamaica works with up to six players, has fantastic artwork, and is a blast to play.

The Hare & the Tortoise is a racing game that works with players as young as seven but is still engaging for older players and adults. Loosely based on one of Aesop’s most famous Fables, each player will place bets on the five animals racing toward the finish line. The animals move based on the cards played during the game. However, timing those movements perfectly makes all the difference. The racetrack is customizable for repeat playthrough, and the game comes in a unique storybook style box. The IELLO edition even includes a little storybook as well!

2. The Quest for El Dorado

The most complicated game on the list (although still easy to learn), The Quest for El Dorado sees players racing through the jungle, across sands, and over rivers to discover the legendary city of gold. Players use deck-building (acquiring new, more powerful cards) to move their adventurers across the customizable game map. It’s no surprise that The Quest for El Dorado was a Spiel des Jahres nominee in 2017. This racing game from famed designer Dr. Reiner Knizia is an instant classic that provides enough variability to last a lifetime. Seriously, who doesn’t love a great treasure hunt?

The second game on the list from Restoration Games, Downforce, is a reworking of a game by well-known designer Wolfgang Kramer. In Downforce, up to 6 players auction off ownership of the six cars in the race. Afterward, gamers take turns playing cards to move the racers around the track. Throughout the race, players have three chances to place bets on who will win the race. Players score points based on how well they bet during the race and how their cars placed at the end of the race. Downforce mixes strategy and luck to create a genuine edge of your seat racing experience that the entire family will enjoy.