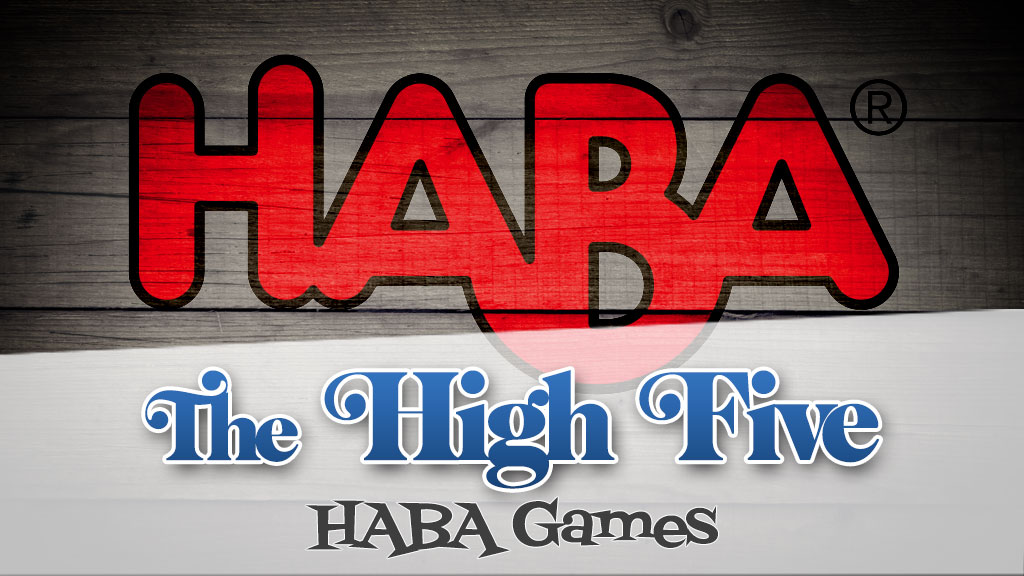 HABA is a classic game publisher specializing primarily in children’s games that has recently dabbled in family games. Needless to say, the games HABA publishes are great candidates for gameschooling. So, without further ado, here are our High-Five games published by HABA. If you want even more discussion about these games, check out Episode 015 of the Game Schooler Podcast.

Karuba is a tile-laying game from Rüdiger Dorn nominated for the Spiel des Jahres (Game of the Year). Each player uses the same tiles during the game, but the results vary from player to player. Players must move their adventurers to their corresponding treasure. It’s this race that provides the tension throughout the game. With simple rules, fantastic arts, and speedy gameplay, this family game makes my list.

Rhino Hero takes the concept of a house of cards and makes a game out of it. Players add new walls (folded cards) and roofs (flat cards) to a growing building each turn. Each roof dictates the design of the next floor and can even add special actions like forcing the next player to move the super rhino figure to the highest floor. The first player to build all of their roof cards wins, or if someone knocks the building over, they immediately lose, and the player with the fewest roof cards wins. Rhino Hero won’t be the last stacking game on this list, but I think it works better with the full family.

In Dragon’s Breath, players predict which sparkling stone with fall out after the “ice block” protecting them melts. In this case, the ice block consists of a stacked tower of clear shower rings that hold a column of various colored gems. This game has quality components and great tactile moments that keep younger kids engaged throughout the entire game. When removing the next ice ring from the stack, it’s fun to see your kids reason which stones might fall. They are better than you think!

Animal Upon Animal is a HABA classic. This simple game of stacking animals on top of one another helps young gamers work on their fine motor skills and gets them to the table early. How fun is this to play as an adult? More fun than most mass-market kids games. Plus, as an adult, sometimes our giant fingers can be more of a hindrance than you’d like to admit. Animal Upon Animal is an excellent game for grandkids and grandparents to play together, or as I like to call it, the “Great Equalizer!”

Adventure Land is a quintessential family game from renowned designers Kraemer & Kiesling. The game includes three distinct modes of play coupled with simple rules. Each turn, you can move your adventurers in one direction, either down or right across the board, as long as you’d like, but you can never go back. With new items constantly entering the game board, these decisions can be more challenging than you think, but it’s always rewarding. Thus, Adventure Land is at the top of this High-Five.