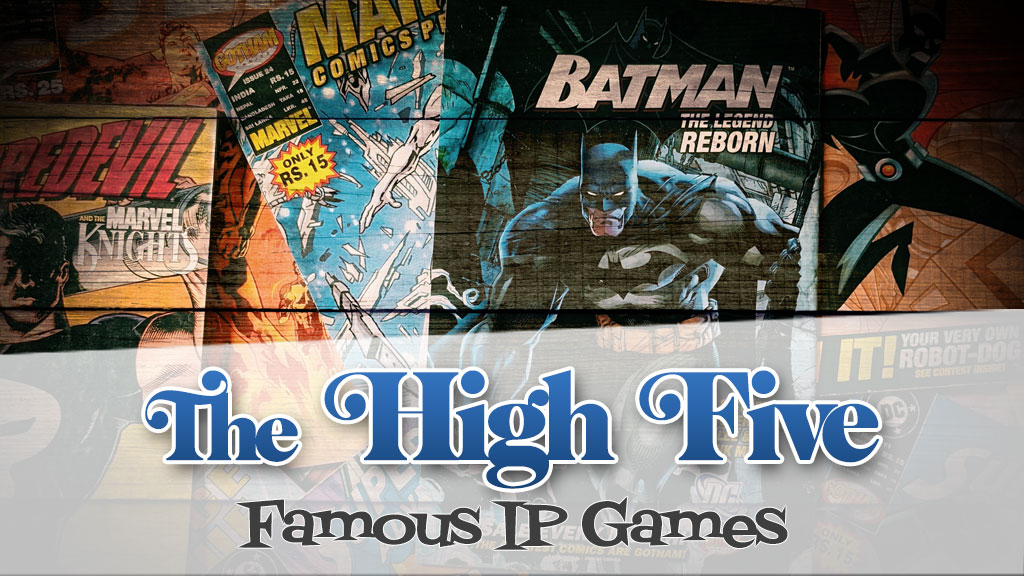 This week, I went through our High-Five games with Famous IPs. In case you don’t know, an IP refers to “Intellectual Property”. Intellectual property is a set of intangible assets owned by a company. For example, Spider-Man, is the intellectual property of Marvel and Disney. They own everything about Spider-Man. As such, game companies must buy a license to use Spider-Man in their product or game. This list includes games in which such a license exists. So on with the list!

Thanos Rising: Avengers Infinity War is a fun cooperative game with plenty of dice rolling. The gameplay is simple, although it can run a bit long. The colorful dice and recognizable superheroes make this game inviting for anyone that has enjoyed the Marvel Cinematic Universe over the last 10 years. And if Marvel, isn’t your thing, USAopoly (The OP) released a Harry Potter version entitled Death Eaters Rising.

Marvel United is one of our recommended games, so you know I like it. This cooperative adventure is widely available and has an elementary rule set and cute miniatures. Marvel United is an excellent game for younger players and excels at the teamwork aspect of cooperative gaming. Be on the lookout for some amazing Game Schooler content for this title.

I love Disney. Disney Villainous is another one of our Recommended Games. This game is probably the most complex on this list, but it benefits from repeat plays. The classic Disney characters make this game enticing to many families, and the three expansions ensure you’ll never run out of content.

You may be asking yourself, why are so many of our Recommended Games are on this list? For two reasons, games with famous IP’s are usually widely available, and these are great games! When you initially hear about this game, you might incorrectly assume that the game is too scary for youngsters. Luckily, this cooperative game stays away from the gore and relies on the source material, which is relatively tame by today’s horror standards. Ravensburger has released a game that teaches kids about logistics through “pick up and delivery” mechanisms, using classic monster tropes.

The top game on the list is Harry Potter: Hogwarts Battle. Why did this game get the top spot? First, the theming and production quality of this game is top-notch. Second, this game teaches young gamers about deck-building one step at a time. Deck-Building is a game mechanism in which players continually acquire new cards with even more powerful abilities. Harry Potter: Hogwarts Battle is a cooperative game that increases in difficulty and complexity as the game progresses. Once kids have played through all of the content in the box, they will have traveled through the entire cinematic journey of Harry Potter. To top it all off, Harry Potter: Hogwarts Battle has several expansions and a two-player version. USAopoly (The OP) also released a similar title in the Toy Story universe that introduces deck-building to an even younger audience. Suffice to say; this is a great game.