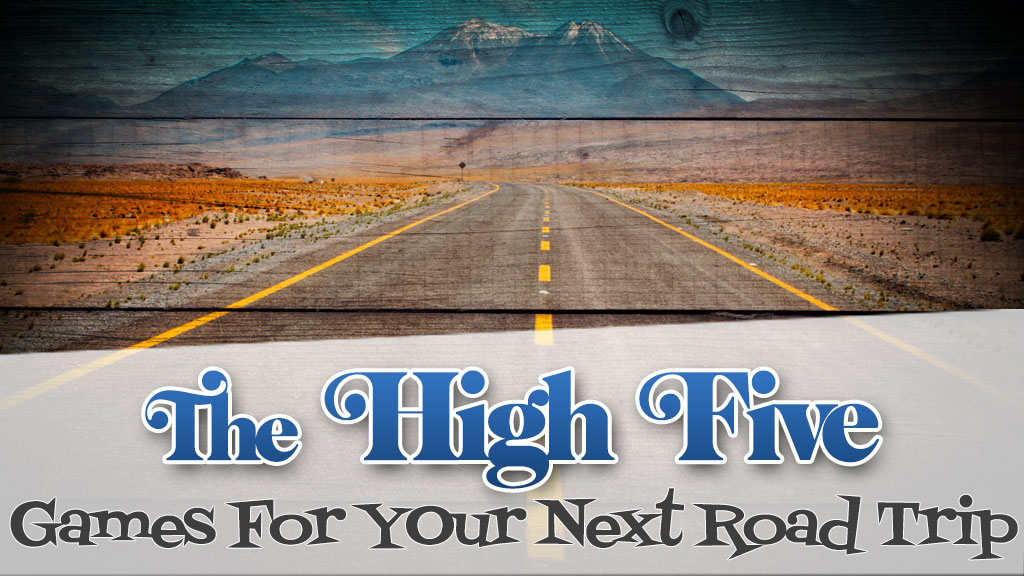 Fresh off of last week’s podcast, here are the High Five Games to bring on your next road trip. I focused on portable games that wouldn’t swallow precious trunk space and games that fit a hotel or restaurant table. Sorry, Mousetrap didn’t make the High Five this time. One last thing, before we dive into the games. These lists are released weekly on the Game Schooler Podcast.

Most cooperative games eat up a bunch of table space, but this one is compact and works with almost every age group. In Similo, players try to guess a secret character from a group of twelve based on one of the other players’ clues. The game is available in various themes such as fables, animals, mythology, and historical figures. You’re sure to find a version that works with your family. The artwork is vibrant, and I’ve seen kids as young as six play this game.

Love Letter is a game of deduction and simplicity. With only 16 cards in the game, Love Letter is exceptionally portable. Players attempt to be the only player standing or have the highest card at the end of the round. The game only takes about 20 minutes to play, and the limited turn actions keep the game moving along quickly. This game started an entire genre of “micro” games, and like most things in life, the original is still the best!

If you want a fast game that can teach kids colors, numbers, and risk management, you might want to take a closer look at LLAMA. In LLAMA, players want to be the first player to get rid of their cards each round to avoid accumulating points. Get stuck with a LLAMA card, and you’ll be earning 10 points! However, one of the great teaching moments of this game is when to drop out of the round. Sometimes it can be more advantageous to drop out of the round instead of trying to win it. Learning when to walk away is a valuable life lesson that this little card game teaches.

The game of Ohanami plays over three rounds. Players draft numbered cards to add to their gardens (stacks of cards in front of each player). The trick? You can only play cards above or below in numerical value of the cards already in your garden. Ohanami has the most strategy on this week’s list, but it still works with players as young as eight. The gameplay is rewarding and has kids working with numbers. Everyone in the family will enjoy Ohanami. It’s a fun number puzzle that teaches critical thinking and risk management.

There is a reason Point Salad has become one of our Recommended Games. The artwork is fun and the gameplay is fast. Each card in the game depicts a vegetable on one side and a scoring method on the reverse side. Each turn, players choose either vegetable cards or a scoring card. At the end of the game, players use their vegetables to score points based on the scoring cards they’ve selected throughout the game. Point Salad is simple, but based on the number of scoring combinations, this game offers infinite replayability. This simple game plays quickly and never overstays its welcome, which is an ideal choice for a family on a road trip. Families could play this every night of their next vacation, and it wouldn’t get old.