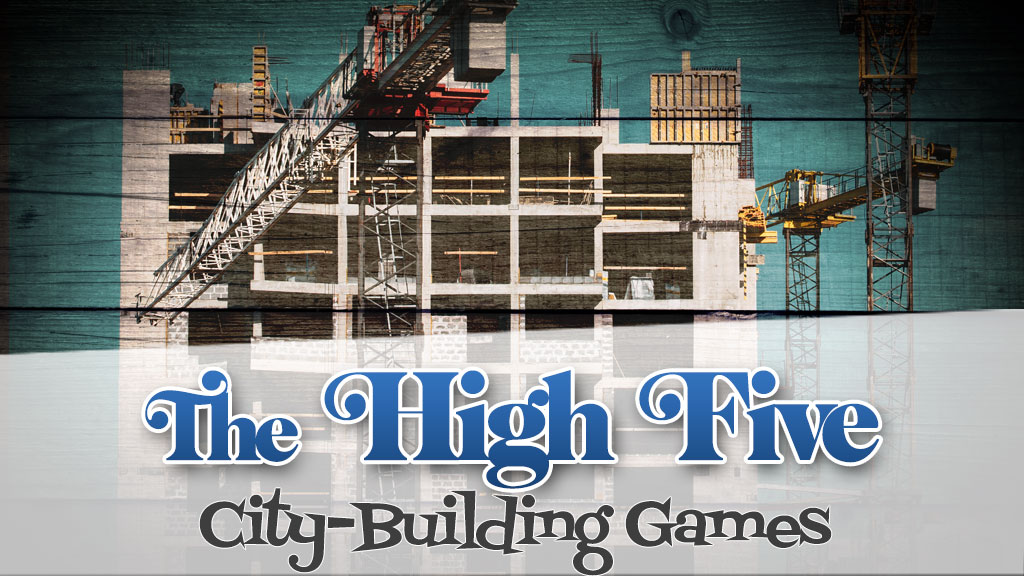 The High-Five challenge for this week was all about family-style city-building games. I wanted to choose games that felt like players were constructing something they could step back from at the end of the game and admire. No reason to belabor the point like an inept city council; let’s get on with the list!

In Machi Koro, players build their city by purchasing building/business cards to add to their tableau. If you want more information on the gameplay, check out our Podcast, where we did a full rundown of this Recommended Game. Machi Koro is at the bottom of the list because it doesn’t feature spatial placement. I think the best city-building games reward or punish players for how and where they place items in the city. Unfortunately, Machi Koro doesn’t do that. Nevertheless, it’s still a fantastic city-building game!

In Warsaw: City of Ruins, players build the Polish city of Warsaw over 6 Epochs using district tiles. The game restricts each player’s city to a 4×3 or 3×4 grid, making for tricky decisions. This city-building game has two very cool features. One, players may place district tiles on top of one another, simulating a city’s build-up over generations. Two, at the end of the third and fourth epoch, players destroy one of the tiles in their city, representing the destruction of the first and second world wars. Throw in some historic buildings, and you’ve got a robust game with numerous learning opportunities.

Conveniently, this week’s Recommended Game of the Week also fits into the High-Five List. In Tiny Towns, players use resource cubes on a 4×4 grid to construct buildings. As the game progresses, space becomes limited, and players must try to make everything fit. Want more detail? Listen to the podcast! I love the replayability of this game. Each game comes with building variations that modify scoring and ensure no game is ever the same. Plus, the included “town hall” mode allows younger players to get in on the action.

Quadropolis is a beautifully crafted city-building game where players use architect pawns to select tiles from a central market. Each player races to add shops, parks, factories, and more to their city in a desperate attempt to score the most points. Some buildings require energy, while others need people for scoring. Of course, you also gain points based on the tile arrangement in your city. Fun art and solid components make this one a winner in my book.

This game is right on the edge of my complexity meter. It may even be a little past it, but Suburbia is so good I had to include it on this list. If the popular computer game SimCity had a tabletop counterpart, Suburbia is it. Suburbia is a tile-laying game of income population. Players build their city with residential, commercial, civic, and industrial hexagonal tiles. Want to add a slaughterhouse to your city? Excellent! You’ll earn income for every restaurant on the table. The bad part? No one wants to live next to a slaughterhouse. I would recommend playing this with older kids because the bookkeeping (point/population tracking) in Suburbia can be a handful sometimes. But don’t let a little added complexity keep you from trying this fantastic city simulator!